On Thursday, Mark Zuckerberg announced that the company formerly known as Facebook will now be called Meta. There will be a lot to unpack on this over the coming days and weeks, but let’s start with this:

If you are a marketing director, or digital agency, who uses Facebook as part of your social media marketing strategy, what’s going to change? At this point, nothing. All signs indicate that the auction system will remain in-tact — as will the content-building platform, audience targeting, ad review process, reporting/analytics, etc. In fact, Facebook the app/social platform will still be called Facebook. The corporate rebranding to Meta appears analogous to what Google did when they created Alphabet — essentially, launching a parent company under which Google became a mere product.

In a way, this was overdue. Facebook already owns other social media platforms, like Instagram and WhatsApp, not to mention companies like CRTL-labs, LiveRail, Onavo, and around 70 others they acquired over the last 15 years. Separating the flagship child (product) from its parent makes sense.

One of those owned companies — which was one of their biggest early acquisitions, back in 2014 — is Oculus VR. So while the timing of the rebrand felt convenient — given the recent increased criticism that came with the release of Frances Haugen’s “Facebook Papers” — Zuck has actually been planning to expand his company into the VR and AR realms for years.

In Thursday’s presentation, Zuckerberg described the metaverse as “a clean, well-lit virtual world,” per the New York Times, “entered with virtual and augmented reality hardware at first and more advanced body sensors later on, in which people can play virtual games, attend virtual concerts, go shopping for virtual goods, collect virtual art, hang out with each others’ virtual avatars and attend virtual work meetings.”

In short, Zuck sees his second act as being the guy who evolves the internet from two-dimensional screens to an immersive digital realm.

Now that could be truly game-changing.

But the promise of the metaverse brings two big questions:

The company has roughly 10,000 staffers in its Reality Labs division, and has promised $10B in metaverse-related funding this year. That’s a lot of people working with a lot of money. But what, exactly, will they create? And will it matter to us?

You’ve probably played a VR game at Best Buy — or tried a cool AR thing at a trade show — but these technologies have yet remained mostly in our periphery. (It’s like your neighbor who had a Camcorder back in 1983. “Home video” seemed like a cool idea, sure … but you couldn’t possibly envision where smartphones and social media would take user-generated video a couple of decades later.)

Right now, if feels irresponsible to guess what the metaverse will look and feel like, and whether or not we’ll like it. But Mark Zuckerberg is nothing if not ambitious. And he has a lot of really talented people working with big budgets against high expectations. Even if we’re talking about coin-flip odds, we should prepare ourselves for big change — one where content is largely in 3D and the definition of “engagements” changes radically.

In his New York Times piece, Kevin Roose broke down the meaning of the new rebrand, which Atlantic writer Derek Thompson summarized beautifully in a tweet last weekend: 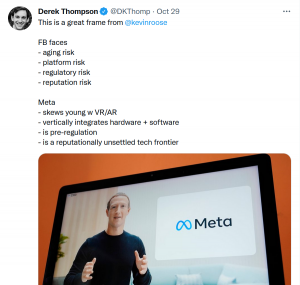 Facebook users are getting older. And ad revenue precedes cultural shifts. That is to say: If the universe of Facebook users starts dwindle (eventually), it’ll happen before the ad money starts to dry up. And once the latter happens, digital marketers will be scrambling to fill that enormous void in their social media strategies.

But it’s about more than users’ ages. The aforementioned scrutiny brought on by the Facebook Papers doesn’t feel like it’s going to go away. Back in 2018, the Cambridge Analytica scandal looked like it might do real damage. User trust dropped by 66-percent, and the company’s stock plummeted. But, after a few news cycles, everything seemed to fade away.

This could be different. The Facebook Papers showed the ugly underbelly of a tech company with which we were already getting a little queasy: that it deliberately traffics in misinformation and divisive content; that terrorist organizations and drug cartels use it to recruit, train and activate members; and, that the company knew, via its own research, that Instagram drives increased anxiety, depression and anorexia in teenage-girl users, but did nothing about it.

In light of this, public sentiment has turned sharply against Facebook. And, more recently, the company’s own staff is turning on them as well. 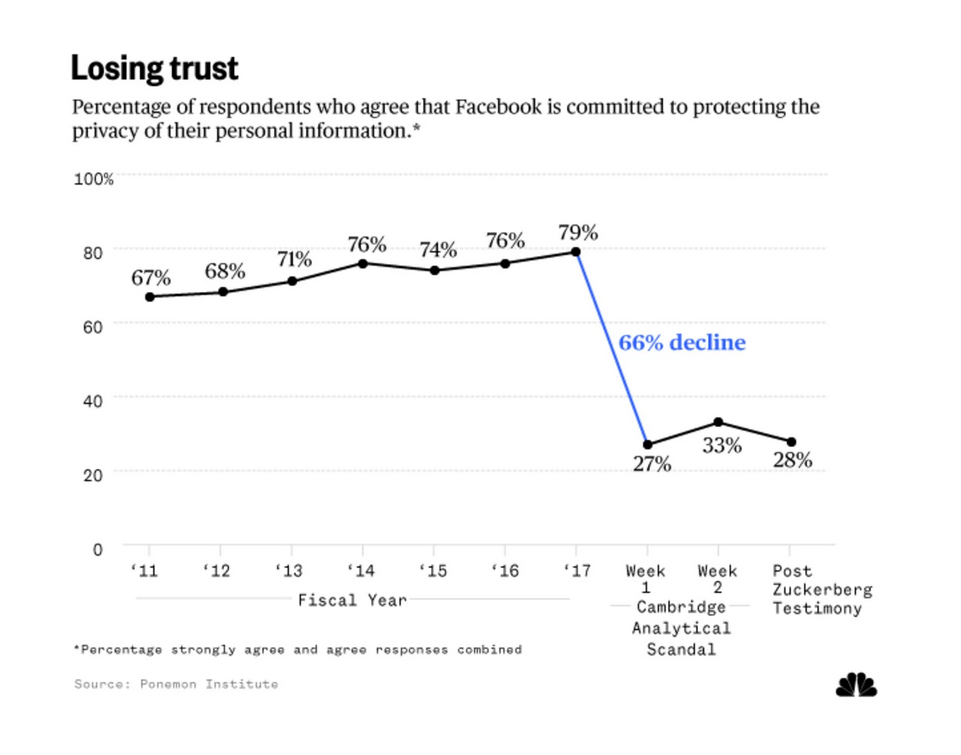 To run a successful company, Richard Branson famously advised, “Employees come first. If you take care of your employees, they will take care of the clients.” But that logic holds if you run it in the other direction: Once your employees start turning on you, it could mark the beginning of the end. Meta/Facebook may have more than just a “culture” problem; it may have something more problematic at its core.

So, we have to wonder:

If negative public sentiment continues to sustain and grow, if Meta employees start moving to greener pastures, and if Congress ever starts seriously regulating the company … what will the social media landscape look like in three years? Five? Ten?

But, one thing is for certain: Change is gonna come. Oh, yes it will. As a digital marketer, you need to be watching very closely what happens from here.