On May 3rd, as part of Philly Tech Week 2018, Technical.ly Philly hosted its inaugural Introduced by Technical.ly — an all-day event with a “choose your own adventure” format, three rooms of simultaneous programming, and a rotating demo floor. Our president and creative director, Greg Ippolito, sat on a panel called “The Customer Journey: A Thoughtful Approach To User Experience.” Here are some of the key thoughts he shared …

On the most important CX considerations:

There are two critical things to remember when it comes to customer experience, regardless of what your role is or what industry you’re in: (1) That CX is dynamic. The customer decides what a good experience is, and you either meet that or risk failure. (2) That the key to delivering great CX is empathy.

A company, by its very nature, is primarily concerned with making money. But that sets its strategy in the wrong direction; you start thinking about how the company can increase its revenue, its efficiency, its ROI. All first-person concerns. But to achieve any of those, you need to convince other human beings, who are NOT you, to give you their money. And they’re not going to do that unless you start with them — unless you understand what they want and need, and find a way to deliver it in a meaningful way.

On which brands are leading the way in CX:

We’ve done a lot of research on Starbucks, looking through volumes of public and non-public documents — training manuals, and the like — to see how they were able to pull off what they did.* Why do we look at Starbucks as a paragon of CX? They did nothing less than revolutionize the fast-food industry. They didn’t merely focus on the product, or the brand, or the speed of service; they centered their offering around the experience (of which the product was a key part, but not everything).

Let’s jump back 25 years: Two things were true back then that are no longer true: (1) that fast food restaurants were not places you hung out; and (2) that coffee was something that your parents made, at home, out of a tin can, that was disgusting. Starbucks changed the very culture in those regards.

For decades, McDonald’s stores were designed to “facilitate turnover.” Red and orange color schemes, close-together seating that was comfortable enough (but far from cozy), bright lighting … it didn’t exactly encourage people to hang around. Starbucks flipped that practice on its head. They want you to hang around; they want you to have a fantastic experience; they want your local Starbucks to be your “third place.”

Now let’s flash forward 25 years, to the present. Starbucks is ranked #131 on the Fortune 500 (ten years ago they were #310; ten years before that they weren’t even on the list). McDonald’s, by contrast, is #112. One of the most successful American brands — and, for decades, the gold standard of the fast-food world — is only 19 spots higher than a company that wasn’t on the list 20 years ago. Oh, and let’s not forget that, over the past few years, McDonald’s initiated interior design and menu transformations … which, without surprise, make their stores now feel a lot more like Starbucks.

(By further contrast, Burger King is #952. That’s a huge gap, and not at all surprising. I can walk out of this venue right now and go to the nearest Burger King, and I’m highly certain I’ll have a bad, or at least underwhelming, experience. They’re consistently, systemically bad at treating customers well. That’s because, for decades, they haven’t been able to stop themselves from focusing on how flame-broiled is better than fried. Well, how’s that strategy working?) 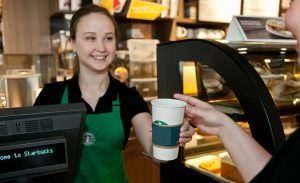 On how we should be thinking differently about CX:

There’s such a focus on digital these days, and one of the inherent promises of digital — going back a decade-plus — is that everything is measurable, therefore everything is fixable and optimizable, therefore it’s all about the data. But marketers run the risk of being too linear in their thinking. I hear more and more marketers, for example, talk about being “data-driven” — but that’s not what you want to be. What you want is to be data-informed. If data is driving your decisions, you’re not thinking beyond the numbers — and the numbers (a) can only tell you so much, and (b) by their very nature, reflect what’s already happened (not necessarily what’s going to happen).

People who know me are tired of hearing me say it, but I love Henry Ford’s line that “If I’d asked people what they wanted, they would’ve said faster horses.” We have to be willing to empathize with the customer — to think about what’s bothering them, how they could be helped, what new experiences they might really enjoy — and put it out there. Don’t wait for data to give you license to try something new. Take a risk. Then let the data tell you if you were right or not. 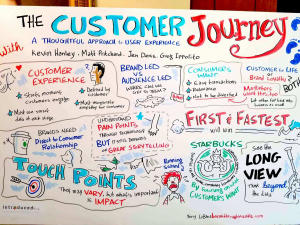 On what advice he has for brands struggling with CX:

David Foster Wallace argued that we’re all hardwired to be “deeply and literally self-centered.” We experience the world only through our own senses; we are primarily driven by our own needs and desires; we’re most at-ease with our own ideas and opinions. And that’s very dangerous. If you make it about you, or your company — and not about your customer — you’re doomed to mediocrity.

If you want to be a transcendent company or brand, you have to make it core to your mission to (a) always truly listen to and consider the customer, and (b) be about something greater than making money. Starbucks wanted to recreate the magic and romance of the Italian espresso bar in America. That’s not a gimmick. Gimmicks fall apart. That’s a real, meaningful goal that’s not just an angle to drive revenue. It’s about giving people something they don’t have, something that would truly make their lives better — even if in only a tiny way.

*You can’t mention Starbucks and not talk about what happened here in Philly on April 12th. So, a quick side-note here: As you may have read, the case has already been settled — which was lighting fast — and Starbucks announced that it’s closing its stores on May 29th to run a nationwide “Racial Bias Training.” Back in 2000, Howard Schultz started on an eight-year hiatus from the company. During his hiatus, the company grew from 3,500 total stores to almost 17,000. That massive growth brought with it a significant deterioration in customer experience — right down to the quality of the product. So, in 2008, among many other things, H.S. closed down all 17,000 stores — which cost the company millions in retail revenue — to retrain all the baristas on how to pour the perfect shot. The reason I bring this up is two-fold: (1) that this Racial Bias Training is a page out of their own playbook (read: the company is nothing if not consistent), and (2) that perhaps this is an indicator of greater problems at Starbucks. They’ve now ballooned to almost 27,000 stores. I was in one yesterday — a Starbucks inside a grocery store, with frozen veggies flanking me to the right and a Citizens Bank kiosk flanking me to the left. When H.S. visited Milan and experienced the romance, artistry and theater of its indigenous espresso bars, and dedicated himself to recreating that magic in the states, I can’t imagine that my encounter at the Chalfont Giant was what he was going for.

Use the form below to request a call with our leadership team. An IMA principal will return your query directly.