If you were to take a respectable course on Content Marketing, your professor would likely take you through its historical evolution. You would be shown a number of ideas and executions — e.g., John Deere’s The Furrow, the Jell-O Recipe Book, etc. — which, over many decades, were critical in shaping the formal practice of Content Marketing that we know today.

But you likely wouldn’t hear anything about MTV.

Which is strange. Because MTV was the first example of an entire network leveraging promotional content for its programming. Nothing like that had ever been done before. It was an experiment of sorts — and one that turned out to be wildly successful.

Up to that point, networks either developed their own programming, or purchased it from syndicators, and sold ad time against it. A clear line existed between the content and the advertising. (In most cases that line still exists, even today.) But the concept of MTV was a network where the programming itself was largely one big stream of promotional content. “Videos,” as they came to be called, were basically ads for artists, songs and albums. The line between content and advertising hadn’t merely been blurred; it had been removed entirely.

In Craig Marks and Rob Tannenbaum’s book, I Want My MTV, the authors outline just how dramatically this all-in focus on Content Marketing, in the form of music videos, affected the record industry. Record sales had been in steady decline throughout the late 1970s, decreasing by 5% in the five years leading up to MTV’s launch (in 1981). By contrast, over the next ten years — the “heyday years” of MTV — record sales doubled, with total annual numbers ballooning to $7.8B.

Now, this is only a correlation. Other variables were certainly in play (the advent of CDs, for example). But MTV was able to connect new audiences with new music, on a national scale, in a format that had never been seen before. So how big was the MTV Effect? That’s hard to quantify. But the effect itself is undeniable.

If you examine MTV, as a concept, through the lens of TV logic, it doesn’t make any sense. TV programmers know that the content (i.e., the “show”) is what viewers come to see, and the advertising is something they merely endure. So how can a network run nothing but ads yet draw and maintain a captive audience? Simple:

The audience didn’t think of videos as ads; they thought of them as the best content on TV. (One key example: Michael Jackson’s Thriller video was such a phenomenon, it led to sales of more than 9M units of the content itself.) 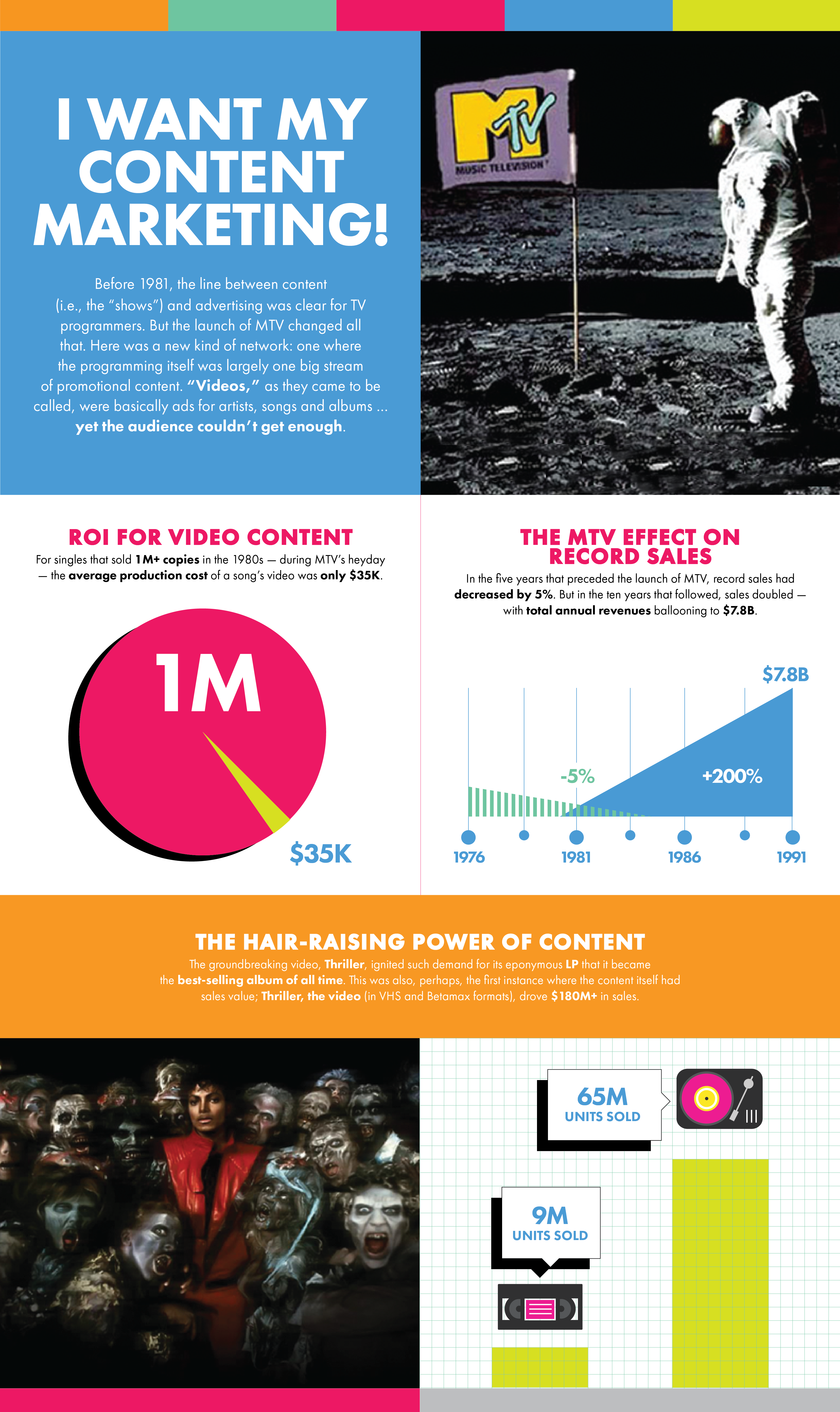 In the aforementioned book, Conan O’Brien describes the first time he saw MTV as a college freshman: “I [couldn’t] stop watching! We watched for six hours. It’s one of those things you can’t describe … It was like a comet streaking across the sky.” The network heads had found a void in the culture, which doubled as an opportunity in the marketplace. Kids wanted to hear about new artists and bands, and wanted to experience them in this new way.

This reminds us of what should be an obvious point:  When content is innovative, exciting and deeply desired by an audience, its power to persuade — and generate sales — is a non-issue. That is to say: Great content, crafted to be relevant to its audience, doesn’t feel like a manipulation; it feels like a light being shined on something you’re thrilled to discover.

Which brings us to the Big Question: How would you grade your own content? On a scale from 1 to 10 — 1 being a blog post that nobody wants to read, and 10 being a video that millions of people are watching, sharing and talking about — how do you score? And what does that score say about your content’s ability to grow your business?

Or, put another way: Are you giving your audiences thrillers … or snoozers?